Dolphin is a popular emulator for both Gamecube and Wii games, but it can also be used to play Ocarina of Time Randomizer on thru the Wii's Virtual Console mode. Dolphin is very good at emulating Wii VC and only suffers from potential slight additional lag in certain areas (such as Market as child), which can be mitigated using settings discussed below.

While Dolphin will be used as a Wii emulator, it is actually much simpler than setting up a Wii. There is no need to softmod, move data onto an SD card, or install a WAD. That being said, there are some steps that need to be taken first.

Once Dolphin is downloaded, extract the zip and open Dolphin.exe. You should see something like this (except that, if this is your first time, your games list will be empty): 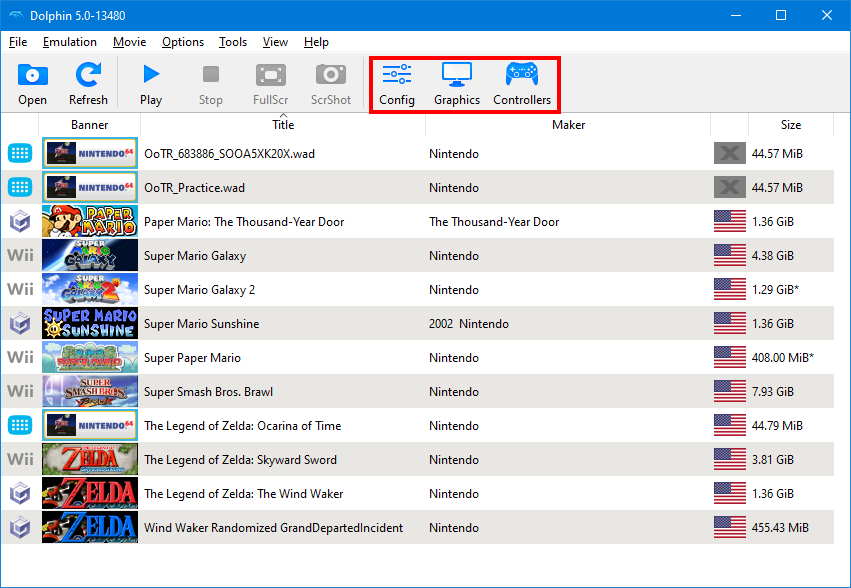 Note the buttons within the red box, these will be used in the upcoming steps. The first thing you will want to do is create a game directory. Go to Config ⇒ Paths ⇒ Add... and select the directory in which you would like your games to be placed. You can even have multiple game directories, if you wish. This will then cause any .iso or .wad files in your selected directory to show up in the home menu, as seen above. 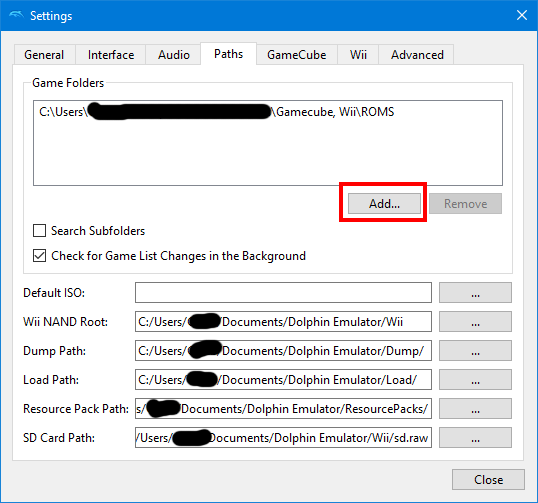 On the Dolphin page, download the latest MacOS Intel version and drag to Application folder per normal installation.

The Disk Image (DMG) will include Dolphin and the Dolphin Updater.

Similar to the Windows setup, create a filepath directory to where the WAD will be located. 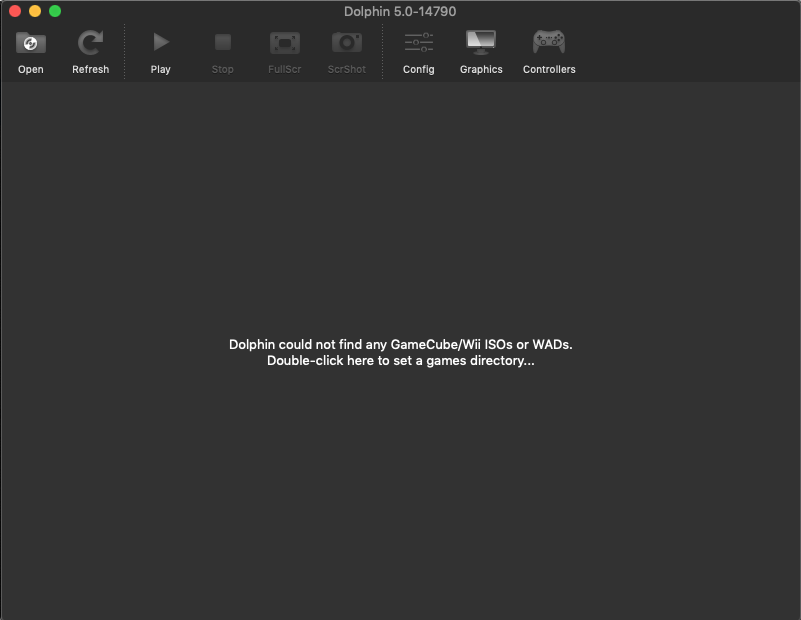 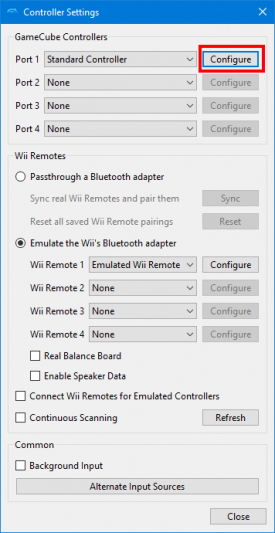 If you are using a Gamecube Controller with a Wii U Adapter by either Nintendo or Mayflash (Wii U mode), then your controller should be detected and configured automatically and the new window that opens will simply ask you to enable/disable the Rumble Pak.

For reference, these are the default controller mappings Dolphin will use. Keep in mind that if you've used the webpatcher, or gzinjectgui with the right configuration, that D-pad left/right/down will be overwritten to properly work with boots/ocarina on D-pad. 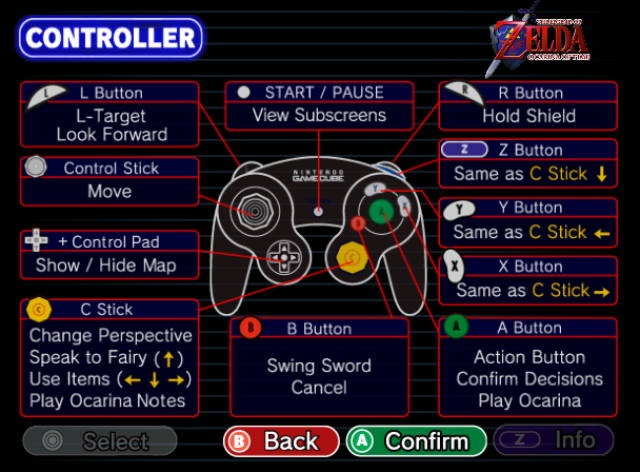 If you are using any other controller, or if you're using a Gamecube adapter in PC mode, then you will need to configure the controller yourself. Note that, even if you have a controller with analog triggers, you must set L and R for the buttons to work properly, not just L-Analog and R-Analog. Below shows a sample controller config with an Xbox controller. 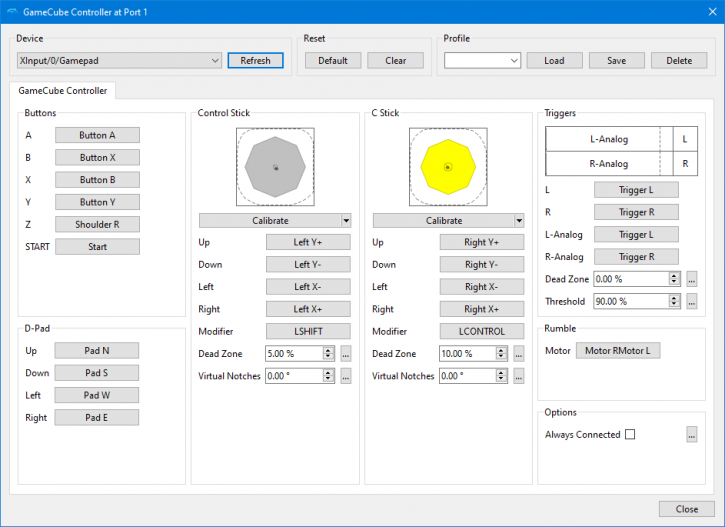 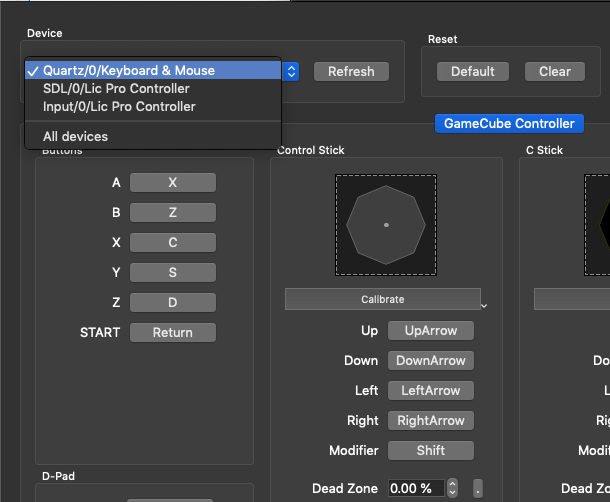 So, now you have either just finished setting up Dolphin for the first time, or are an experienced Dolphin user. There are a few more settings that must be set to certain values to properly play the randomizer.

First, under Config ⇒ General make sure that Allow Mismatched Region Settings is unchecked and Fallback Region is set to NTSC-J. This ensures that you don't get a PAL frame rate. 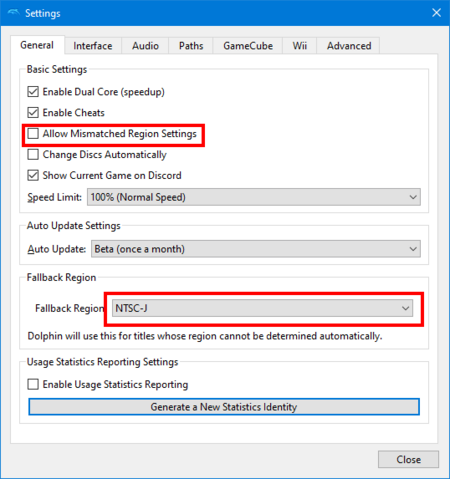 Next, close the window and under Options ⇒ Graphics Settings ⇒ Hacks, ensure that Store EFB Copies to Texture Only is unchecked. This fixes the black pause screens

This is the only part of setting up Dolphin which is similar to the set up for Wii VC. Refer to the "Generating a Seed" section on the Wii VC page for how to generate a WAD.

After generating the WAD, place it in your game directory. It should appear in your home menu. Double-clicking the seed should then launch it the same way any other .iso is launched from Dolphin, no NAND installation or Wii channel required. If there is already an in-game save file present, delete it before starting the new seed.

After Finishing a Seed

Since all OoTR WADs use the same internal ID, Dolphin will consider them all the same game, meaning saves will carry over between seeds. You'll just need to delete the old save data to make room for a new save.

If you are experiencing lag, these are optional settings to change from default.

First go to Options ⇒ Graphics Settings, and then in the General tab change the Backend from OpenGL to Vulkan if you are on Windows. Dolphin recommends switching this driver as there may or may not be performance driven issues using OpenGL and its compatibility: Dolphin Performance Page 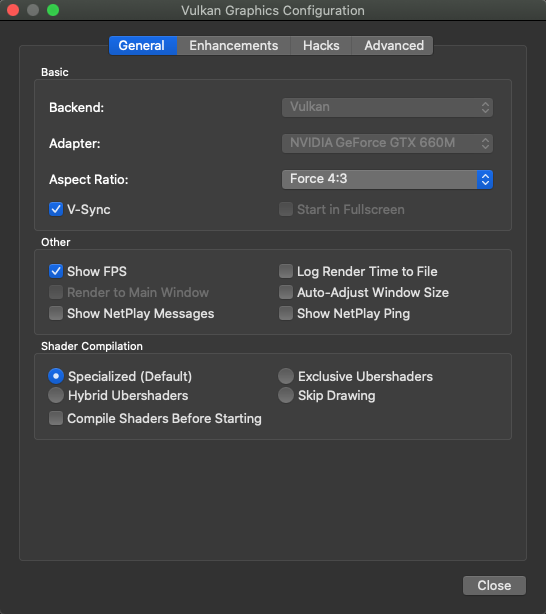 Second, there are optional graphics settings enabled for more frame rate heavy games which are not required for Ocarina of Time. Below are some settings to verify if you are experiencing lag and what to uncheck. 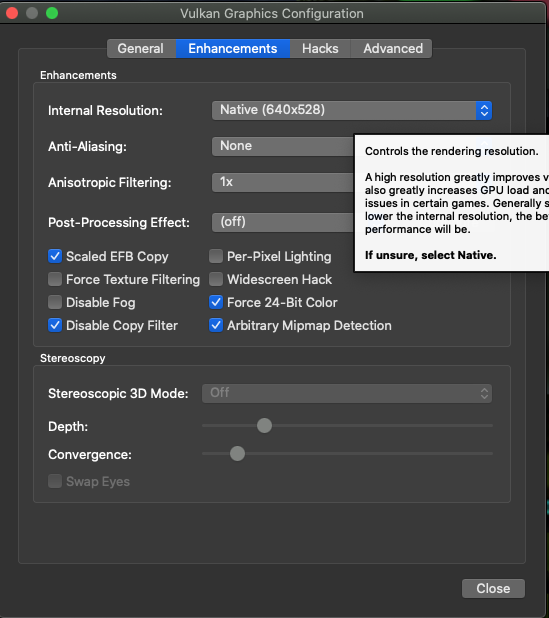 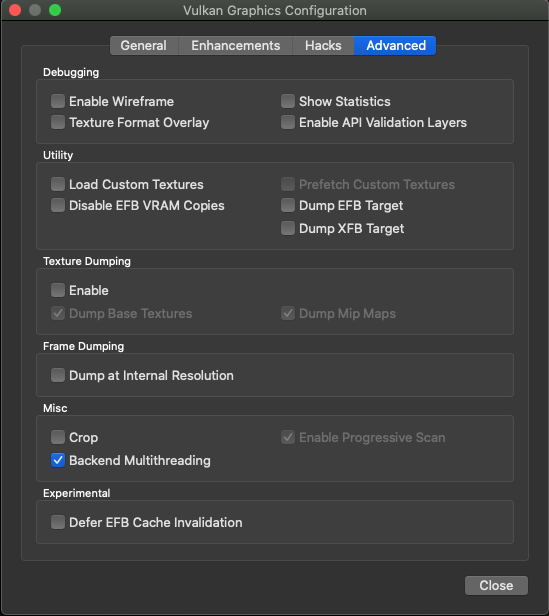 Depending on the power of your computer, you may want to enable some graphics enhancements. If your computer can handle it as it makes games look much nicer. Back on the home page, go to Options ⇒ Graphics Settings ⇒ Enhancements. There is no exact guide for what to do here, mouse over each individual component to see what it does. If your computer is powerful enough, you can probably enable most things without worrying about it. Otherwise, you may have to do some trial and error to figure out what your computer can handle. Per-Pixel Lighting and Anti-Aliasing above 4x are particularly demanding. Post-Processing Effects are mostly gimmicks. 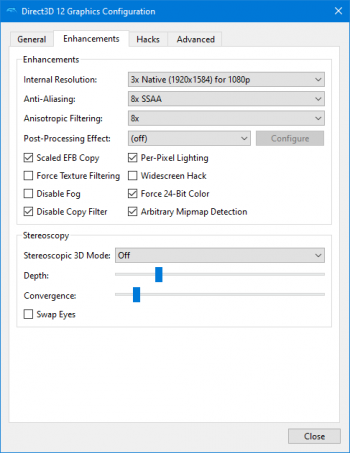 Go to Options ⇒ Graphics Settings ⇒ General ⇒ Aspect Ratio , and select whatever you prefer. Note that if you update Dolphin, this setting may return to its default state of 16x9. 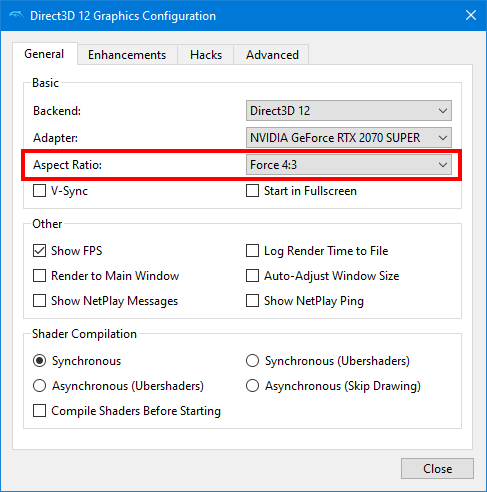 These are common issues with running Dolphin. If you are having issues, try any of these that seem like they may help. If you continue to have problems running the randomizer in Dolphin, please come to #setup-support channel on the Ocarina of Time Randomizer Discord.

MacOS will not open Dolphin

Some security settings may affect whether the application has privledges to write to a file directory. This can be overridden by giving permission to Dolphin to write to Finder. Open Terminal and in the command line copy these two commands and run them in one after the other:

Change where it says path to your path directory location before running the command. You can copy the path by right clicking Dolphin.app with Opt key held and click Copy Path Name.

After running the commands, Dolphin should reopen normally.

Performance may be poor message on startup

When starting the emulator, yellow text may appear which says "Performance may be poor". This only occurs on older computers or computers with specifications lower than Dolphin recommends. Refer to the previous section on Optional Settings to decrease Graphical Enhancements and change Video Driver. Actual gameplay may not be affected, however you may experience some lag. 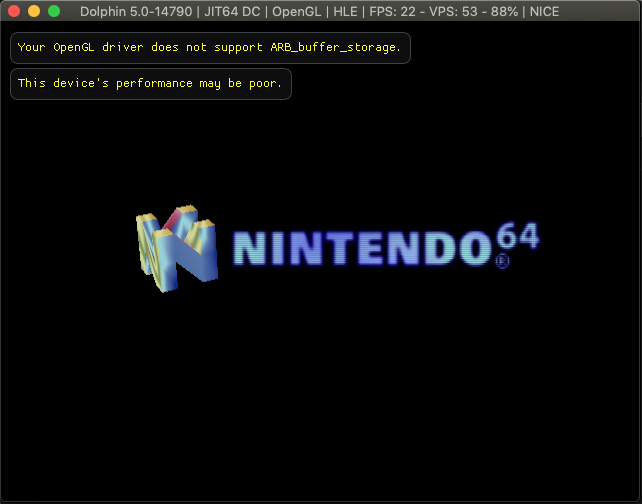 The Game is Running Slowly/Less than 20 FPS

The first thing you need to do in this case is look to the top left of your emulation window. There it should display both FPS and VPS. FPS is the framerate of the game you're running, while VPS is the framerate of Dolphin's output. Based on the VPS value, continue to one of the following subsections.

VPS is less than 60 and unstable

If this is the case, your computer can not handle the current emulation, you should turn down some of your graphical enhancements.

There is likely some issue with the region being stuck at PAL, ensure you took the proper steps regarding the region in Randomizer Dolphin Set Up.

This one is much trickier, as this implies that, as far as the emulator is concerned, the game is running at full frame rate. This should be a last resort, go to Config ⇒ Advanced ⇒ Clock Override, checking Enable Emulated CPU Clock Override, and setting the slider to 200% (or whatever number seems to work for you). This is not allowed for racing. 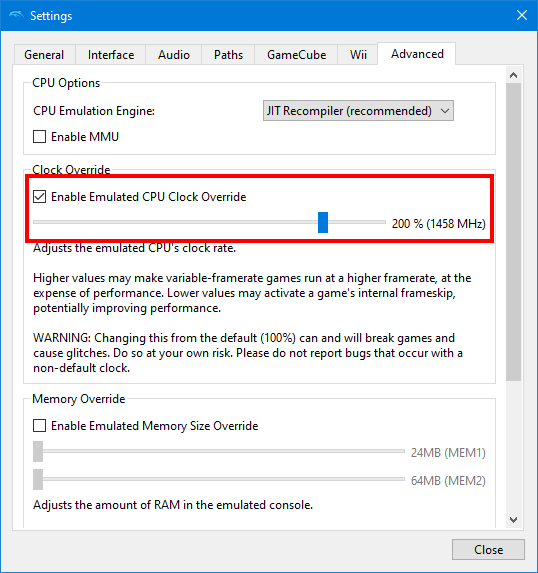 Click on Controllers on the home page and then either untick Background Input (your controller inputs will still be registered with this setting unticked even when the window is unfocused), or change the HOME binding of Wii Remote 1.

This is a known bug with resetting VC on Dolphin. You can click OK on both dialogs that pop up and then won't have to worry about it again until you restart Dolphin itself. You can also go to Options ⇒ Configuration ⇒ Interface and disable Use Panic Handlers to always ignore it.